Biomass is one of the sources for power generation with the highest growth potential in the forthcoming years, according to forecasts of the “Atlas de Energia Elétrica do Brasil”, published by ANEEL in 2009. Both in the international and domestic markets, it is considered as one of the key alternatives for diversification of the energy matrix and the consequent reduction of the dependency on fossil fuels.

The Brazilian sugarcane is the most efficient culture in terms of power generation in the world. For every hectare of sugarcane planted, near 7.500 liters of ethanol are produced and near 8.500 kWh of bioenergy are exported.

The Brazilian sugarcane is the most efficient culture in terms of power generation in the world. For every hectare of sugarcane planted, near 7.500 liters of ethanol are produced and near 8.500 kWh of bioenergy are exported.

Brazil is the top sugarcane producer in the world. Today, there are more than 400 plants in the country producing ethanol, sugar and bioelectricity, and the 2010/11 crop resulted in the grinding of approximately 625 million tons. The mid-southern (Southeast, Midwest and South) region of the country is in charge of near 90% of the national production. Sugarcane production is now experiencing a consolidation process in the market; however, it is still very fragmented. According to data provided by Datagro, the largest producer group currently has a market share close to 9%, and the top twenty five (25) producers hold 58% of the domestic market.

Today, sugarcane is considered to be an important energy input for Brazil. According to data disclosed in the Balanço Energético Nacional (National Energy Balance) 2010, sugarcane plantations in the country contributed, in 2009, with more than 18% of the internal power offering with the production of ethanol and bioelectricity. 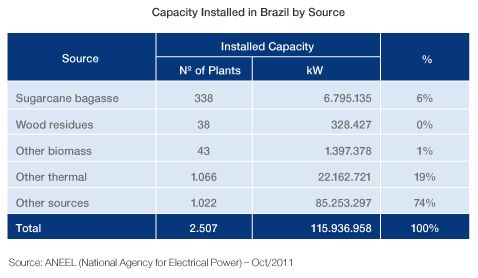 According to a study prepared by Cogen, in 2010, the sugar and ethanol production plants presented the average generation of 1.800 MW, corresponding only to 3.7% of the country’s needs. With the implementation of high-performance boilers and utilization of sugarcane straw, the study suggests that, in 2020, this generation may be increased to 13.000 MW on average, representing 14% of the domestic annual power demand. This indicated that there is a large room for growth.

There are some advantages for the country in the adoption of co-generation by using sugarcane bagasse and straw:

To encourage investments in this source, the Government of the State of São Paulo grants benefits for co-generation projects based on sugarcane bagasse and straw located in São Paulo. These benefits include immediate exemption of state (ICMS) tax in the acquisition of equipment and capital goods used for co-generation.

The investment opportunity in this sector results from the plenty of raw material in Brazil, a fragmented market and a clean and renewable energy generation.

Similarly to other countries, planted forests in Brazil are cultivated according to the direction provided by sustained handling plans, in order to reduce the environmental impacts and promote economic and social development for the surrounding communities. Based on advanced management and control technologies, the pulp & paper companies look for achieving excellence in the practices adopted in terms of sustainability in the environmental area.

Forestry biomass in Brazil is typically composed by:

Today, The Brazilian production of pulp and paper is exclusively originated from planted forests, and is one of the most developed and competitive markets in the world. Eucalyptus, for example, presents an ongoing productivity growth, and in 2010, it reached an average production of 44 m³/ha year, which is twice as considerable as that of Australia and four times as significant as the equivalent species in the United States, two major global producers. In 2010, Brazil had 6.5 million hectares of planted forests (eucalyptus and pine), according to ABRAF (Brazilian Association of Planted Forest Producers), and the planted area exhibits an average annual growth of 4.2% between 2005 and 2010. 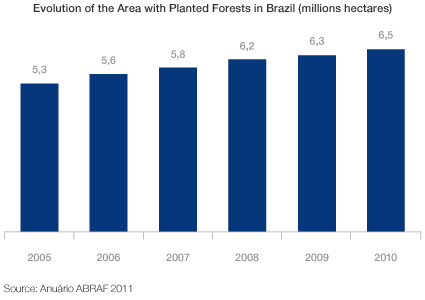 Brazil has potential for growth in this industry. When compared to other countries, the area with planted forests in Brazil in relation to the total national area is insignificant, as shown on the table below.