Wind power has exhibited great performance worldwide, both by the development of new technologies and the growth in the installed capacity. In 2010, 39 GW of wind power have been added to the global energy matrix. Such increase was greater than any other renewable energy technology and three times larger when compared with the 11.5 GW of wind power added in 2005 in global terms. The chart below shows the evolution of this generation source over the last 15 years. 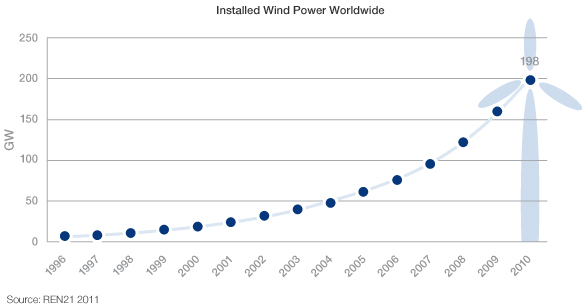 This growth has been primarily driven by China, which was responsible for 50% of the global installed capacity introduced in 2010, when compared to 4.4% in 2005. China added 18.9 GW of wind power to its energy matrix in 2010, which corresponds to an increase of 73% when compared to 2009, placing the country in the position of the global leader in wind power installed capacity, totaling 44.7 GW. 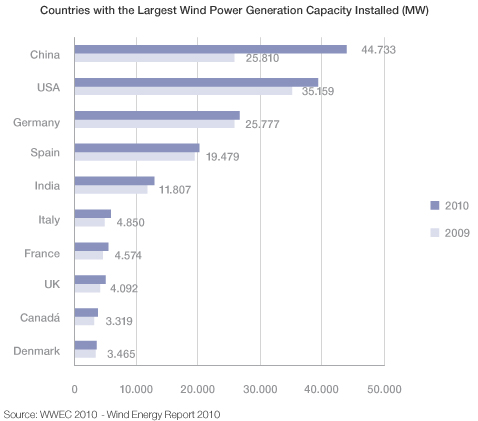 In the end of 1990s, the Brazilian government completed the Atlas do Potencial Eólico Brasileiro (Atlas of the Brazilian Wind Power Generation Potential) with measurements at a height of 50 m above the Earth’s surface, estimating the wind power generation potential in the country to approximately 143.000 MW. Today, according to technicians of the Ministry of Mines and Energy, the data indicates that the Brazilian wind power generation capacity may exceed 300.000 MW, if the measurements are carried out at heights between 80 and 120 meters.

Most of the Brazilian wind power generation potential is in the Northeast region, which is individually responsible for 52% of the total figures. 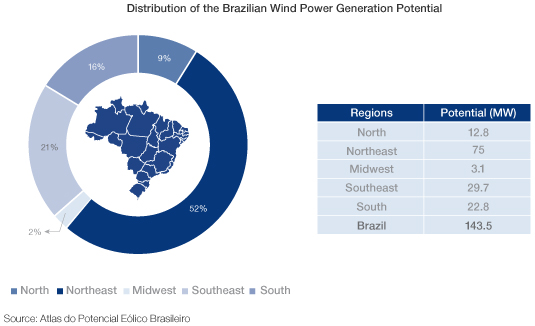 This generation source was primarily made feasible in the country during the Program for Incentives to Alternative Electrical Power Sources (PROINFA), carried out from 2002 to 2010, aiming at increasing the participation of electrical power produced by alternative sources. Until a few years prior to that, wind power generation was explored only for academic purposes or punctually used in regions that did not have power transmission lines. At that time, a series of measures were taken to make wind power generation feasible, including the conduction of power auctions exclusively for alternative sources. The present value of the average power price negotiated in these auctions is R$ 298.00/MWh. On the other hand, it is possible to observe that in LER 2011, the value of power sold in the auction conducted by ANEEL was below R$ 100.00/MWh, and at the A-5 auction, which occurred four months after LER, presented a slight recovery in the value of negotiated rates, to the average value at levels above one hundred reais. The higher price paid for power during PROINFA attracted several investments, which by their turn, helped make wind power generation economically feasible in Brazil. 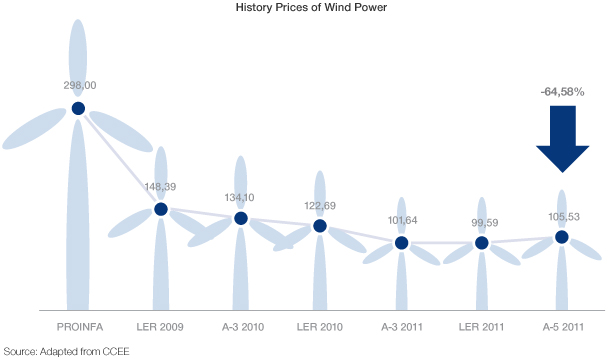 The recent financial crisis in the developed countries has been driving the equipment suppliers and foreign investors to search for new markets, and within the current scenario, Brazil is considered as one of the key markets due to its virtually unexplored large wind power generation potential, as well as the growth and solid foundations of its economy. Only one manufacturer of wind turbines (German Wobben) was operating in the Brazilian market until a few years ago, but several international companies, such as Argentinean Impsa, Danish Vestas and American GE Wind, among many others, have recently exhibited interest in installing their manufacturing plants in the Brazilian territory, especially in the Northeast region, which holds the largest wind power generation potential of the country.

Among other benefits, the entrance of a series of suppliers in the country has contributed to a higher financial leverage before fostering institutions. For example, one of the requirements for financing by BNDES (National Bank for Economical and Social Development) is for a minimum nationalization index of the equipment to be financed.

It is possible to observe that, within only two years, the investment cost dropped by approximately 29%. Such reduction is directly reflected on the prices practiced in the power sale auctions.

Today, wind power is responsible for only 1% of the power installed in Brazil. This minor representativeness tends to be temporary, as in 2012, the installed capacity of this power source should increase threefold, due to the start-up of operations of several wind farms that won the first reserve auction with the participation of wind power generation companies (2009).

With the contracts signed in the A-3 and Reserve auctions in 2011, the wind power generation installed capacity in the country will jump from 1 GW to 7 GW in 2014, and should be responsible for near 5% of the national energy matrix. Until 2020, this source should exceed 11 GW, responding for 7% of the national matrix.

The evolution of the wind power generation is also compatible with the current scenario of the generation matrix in the country. Brazil has approximately 70% of its power capacity being produced by hydroelectric sources. Considering that winds have frequency and intensity peaks during the dry season periods (when the reservoirs are emptier), there is a significant high hydroelectricity-wind power complementariness.

However, even with several strengths in favor of the development of the Brazilian wind power industry, there are still some hindrances that constrain the segment. As well as in other industrial segments, lack of infrastructure is still the major bottleneck for the establishment of the businesses. The manufacturers are obliged to install their plants close to the region where the wind farms will be constructed, as the national logistic system is many times precarious and does not enable the efficient transportation of equipment.

Another bottleneck that impairs the growth of alternative sources, especially the wind source, is the national transmission system. As the country was also dependent on hydroelectric sources, the transmission system was planned to primarily service the large hydrographic basins. This obliges the entrepreneur to be concerned with the connection of its power to the closest line. The solution found by the competent bodies for such hindrance is the ICGs (Installations of Exclusive Interest of Generation Plants for Shared Connection), which are transmission lines shared among the power generation companies within a given region.